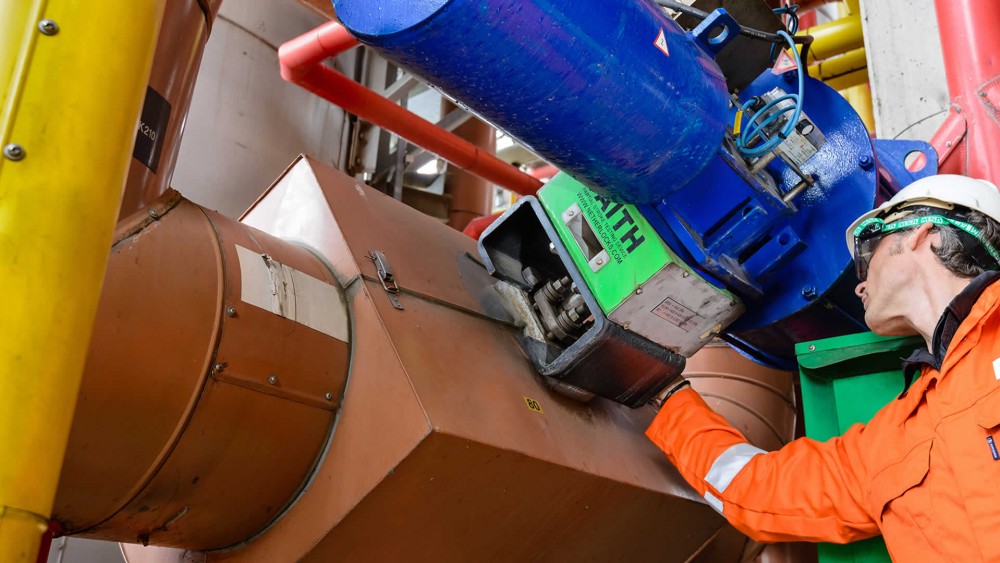 An Antwerp based leading global synthetics company uses partial stroke testing to test the availability of some of their most critical ESD valves. Remarkably, they found that some valves that performed spotless in full stroke tests during stops, turned out to be stuck during live process. Without mechanical partial stroke tests, these critical on/off valves would have remained open upon request for an emergency shutdown.

To prevent overpressure in a large, 30 meter high column, both of its inlet lines are equipped with ESD valves. Normal control valves regulate the filling of the column. The ESD is situated directly behind this control valve, in order to fully shut down the supply to the column in case the control fails to keep the column pressure below a safety threshold. The ESD valves form a last line of defence against critical overpressure which would result in explosion danger.

The maintenance supervisor who was involved with the selection of the ESD valves, states: “For this application, soft seated ball valves of a renowned German brand were used. The medium going through these valves was a monomer with a temperature of up to 200 °C. The valves were carefully selected based on the application, in consultation with engineers of the valve manufacturer.”

In 2010 the company decided to increase its plant stop interval. One of the various measures was to equip the respective valves with mechanical partial stroke test systems. This drastically increased their plant stop interval from 1 to 5 years, which resulted in considerable savings of time and money.

The implementation of mechanical partial stroke test devices for these valves resulted in an unforeseen finding. Although the valves had not given any problems before during full stroke tests, upon their first PST both valves turned out to remain stuck in their seats and could not be closed. The test revealed that the ESD valves, which should offer an ultimate protection against hazardous pressure build-ups with potentially lethal consequences, could not be relied on and in fact did not offer any additional safety. An immediate root cause analysis, done together with the valve manufacturer, provided the necessary answers. It appeared that the ball of the valves got stuck in their seats due to the temperature of the medium. The balls were made of a material with a much larger expansion coefficient than that of the valve housing. The ball expanded much more than the housing. This difference was bigger than could be compensated for by the spring packed seats of the ball. So when production commenced and medium started running through the valves, the temperature soon reached the point where the valve could no longer be shut.

As a result, the balls of the valves were replaced. The new balls were made from another material, with a more suitable expansion coefficient. With the lessons learned, it was decided that more ESD valves were to be equipped with PST systems. Also the risks that had come to light were added to their equipment malfunction database, to avoid repetition of this incident in the future or in any of the other global facilities. The two valves that were equipped first are currently still tested on a bi-weekly schedule.

The chemical company had carefully considered various partial stroke test systems. Their main consideration was between smart positioners and mechanical jammers. They found that the main advantage of smart positioners was the diagnostic data that support a preventive maintenance approach. However, these systems rely on the availability of a BUS communication system like Hart or Profibus, which are not commonly installed in plants built a few decades ago.

From a reliability perspective, Smart positioners are the least preferred alternative according to their maintenance supervisor: “Adding a smart positioner to a system adds an extra component with its own risk of failure. And when this component fails, the whole ESD system fails”. Additionally, positioners perform their partial stroke test by releasing only a fraction of the actuator air pressure. In this case, positioner test results would indicate that the valve was stuck after release of a confined percentage of air pressure. What to do with this information is unclear. Does this call for an immediate shutdown to perform maintenance to the ESD valve? Or can one assume that release of all air will still close the valve and maintenance can wait until the next stop?

“Mechanical jammers offer much more reliability”, says the supervisor. “The systems are simple and robust. All actuator air is released, matching the true course of events during an actual emergency shutdown. The test gives a definite indication whether or not the valve would actually move during an ESD. Due to the manual operation and the mechanical blocking mechanism, chances of failure are next to none. And it is fail safe. If a mechanical jammer cannot be engaged to start a test, the ESD system is still fully functional”. Having experienced the added value of PST on top of full stroke tests, they have equipped a dozen more ESD valves with a mechanical PST system; all to their complete satisfaction. Also for future projects, they stick to the mechanical way of testing. “The absence of a risk of overshooting the test angle is what we value most. Therefore we prefer a mechanical partial stroke testing system”.